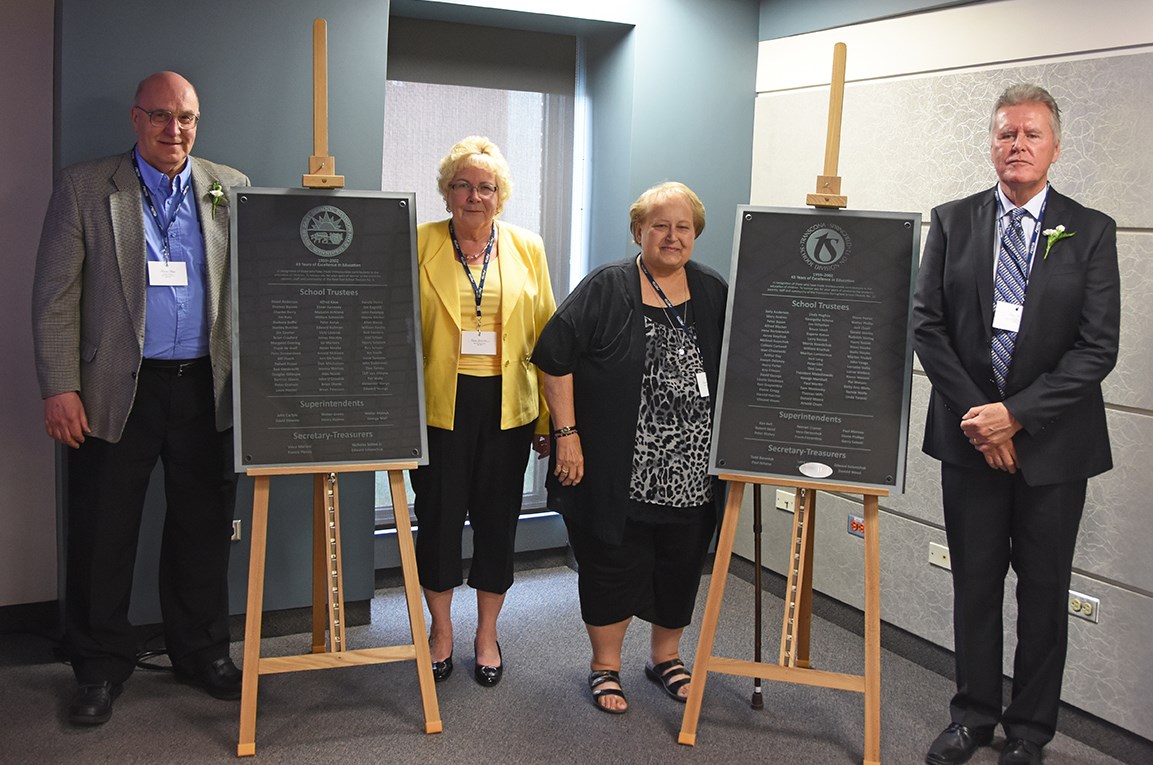 In 2016, the RETSD board of trustees held a special event that, in turn, inspired them to take things a step further.

The provincial government proclaimed that year "The Year of Women Trustees," and the board honoured women trustees who served before them by inviting them to the Administration Offices for a celebration. The success of that event encouraged them to find a way to honour all trustees, superintendents, and secretary-treasurers who served before them.

On June 1, those honourees were invited to the Allen Rouse Room at the Administration Offices to celebrate their history with the division, and witness the unveiling of two glass plaques imprinted with their names.

"While in the process of creating these plaques, we had many discussions about compiling the history of our division in some way," says board chair Colleen Carswell. "We wanted to collect as much historical information as possible to ensure it wouldn't be lost to time."

This led the board to develop and publish a book about the history of the two legacy school divisions—River East No. 9 and Transcona-Springfield No. 12—that were formed in 1959 and came together to create River East Transcona in 2002. Each honouree who attended the plaque unveiling was presented with a copy of the book, titled, "A Historical Look at River East Transcona School Division."

It was no small task to gather historical information that spanned more than four decades, but Ms. Carswell and fellow trustee Eva Prysizney were up to the task, having organized the event for women trustees in 2016.

They searched through minute books, did online research, and explored historical documents at the Legislative Library, Manitoba Archives, and Winnipeg Library. They also spent countless hours making contact over the phone with former trustees, employees, and their families.

"The most enjoyable part was often the discovery of photos, moments in time that brought faces to names," says Ms. Prysizney. "Then, a voice on the other end of the phone would bring a personal story to a photo and the person with it."

The board hopes the plaques and history book not only honour those who have served in the division, but also help people appreciate the community's heritage, and see how it has changed and grown.

The Cobb County School District is committed to parent, family and community engagement, and it is our hope that by providing this tool on our website that we are making our information more accessible to families whose first language is not English and thereby enabling better engagement in public education.

Powered by
Back to top